Ranjiv Kapur, COO, Triburg addressing the gathering of exporters at the ICAHT-2016

The 12th edition of ICAHT-2016 conference organized by OGTC held recently at India Habitat Centre, New Delhi, was themed ‘Innovate, Integrate, Motivate?. The cross-disciplinary event explored creativity, and the creative process through the lenses of imagination and innovation. Like always the sessions projected more than just providing theoretical information on the topics chosen, and also raised some pertinent questions towards the middle- and top-level management present at the event, compelling them to introspect, review and restructure the currently ongoing systems or operations at their enterprise.

In an industry where most people argue that ‘low operator efficiency’,is the biggest reason for lack of competitiveness, eventually resulting in closure of business, Ranjiv Kapur, COO, Triburg, who spoke on ‘A turn around journey; Cost → Profitability’ revealed that it is actually ‘Management Failure’ that contributes 52 per cent in making business go sick. Following the major contributor of loss, ‘Faulty Planning’ comes up as 14 per cent responsible while only 2 per cent of the business failures were ‘Labouroriented’. “Focus on who is responsible at grass root level and then move forward. Suppose you took fabric worth Rs. 10 crore and your CFO and GM is sitting in the airconditioned office. After three months, he is providing you report of this much and that much was damaged or efected. What good is that report to you and for your organization? That will serve no purpose. This is when cash turns into trash,” said Ranjiv forcefully

Ranjiv continued, “Like pricing isn’t cost, productivity isn’t central, but part of making profit. Waste Management, Price Management, Managing Expenses and the like are other parts of profitability that our management needs to focus on.” After stunning the audience with a slide displaying photographs of celebrities like Amitabh Bachchan, Shahrukh Khan, Deepika Padokone and Kareena Kapoor Khan, Kapur questioned, “Tell me what do they have in common? They all have raving fans. Can you or your organization, or the department you look after put that photograph over here and say that you have raving fans? Who are your raving fans? Your customers… Your employees….,” averred Kapur during his highly appreciated presentation 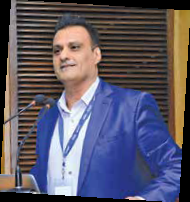 Giving a global perspective to human capital,Charles Dagher, Dagher Consulting Group Pvt. Ltd., claimed that Asian soil is considered most fertile for the same. “If you see around the globe, the most brilliant and intellectual class of people are from Asia. However, what needs to be done is to cultivate Asia and you will see world’s most advanced businesses growing here because one per cent increase in productivity is equal to eight per cent increase in profit,” elucidated Charles Dagher, while speaking on ‘Cost Management in World Class Manufacturing’. He however, pointed out that it is not only about just people, but the right set of people with right skill sets to implement and make the systems work.

However, Asia in general and India in particular does lack in infrastructure and right tools necessary for cultivating its human capital. “Despite the fact that HR Managers handle most pertinent capital, viz human capital, the HR is not recognized at par with other professions and that is the reason that when global investors want to invest here, we become a bottleneck instead of facilitators” reasoned Aisshvarya S. Shah, CEO & Chief Trainer, Work Senses, while speaking on the topic, ‘HR – A Business Partner’. She raised some very pertinent queries… Are we even expecting our HR team to be having a deep understanding of our products, our profit model, and our business happenings? Do we even feel that they are required? Specifically, are we even ready when global investors who are looking at us, or are we proving as a bottleneck to it?

She also lamented on the fact that (HR) is still “taken as a support function and not as the employee nurturing or employee engagement function.” While emphatically criticizing the orthodox approach of HR profession, Aisshvarya continued, “Today on the production side and on the design side, we have some of the most cutting edge design technologies, tools being utilized. But as HR, not much has been done to instigate a change.”

Her session was a free flowing debate on ground realities of the HR Department and what it should be like… The industry, particularly from the HR Department of export houses, shared that the HR is not given that power to bring change in the organization. Every change has to go through management and the HR is merely kept as a department and not treated as an important functionary. “We don’t play functional role,” lamented many. In fact, some also pointed out that HR is just a department or a role to show as a part of CSR and worker welfare. But actually, no efforts are being put to make it as a business partner

It was suggested by many of the speakers that there is a need to do things differently – motivation, involvement and greater understanding of the business to the HR – so as to align workers and other employees to the vision of the company were some of the core areas defined for change. “If the feeling of ownership in the workers could be developed and could be directed towards the organization goal, much of the woes in the industry would be done away with… For that the HR has to be looked upon as a business partner,” argued Aisshvarya.

Nitish Burman, Principal Consultant, RBC, speaking on ‘Strengthening Pre-production for Performance Enhancement’, asserted on the need for the overall “cultural change” in the apparel industry. Here again the emphasis was on people and their performance. “We have to understand that merchant is central to the supply chain in the apparel business. He is the only person educated about everything. He needs to communicate to everyone. Earlier, we used to say that ‘what I say is important regardless of what people understand’. But today, ‘what I say isn’t important but what I make people understand, is’.”

In the concluding session, K. K Jalan, IAS, Secretary, Ministry of MSME, and the Chief Guest, reaffirmed his faith in the garment industry and its importance as a ‘people’ industry, “The apparel industry is important for the country for two reasons: First, it is one of the biggest employment providers in the country; and second, it provides the foreign exchange reserves,” he said. While expressing full support from the Government, Jalan added, “Employees of AEPC used to go to Hong Kong once in a year as an ‘exposure’ to international business, but that no longer happens today… We must do something to make our employees competitive. OGTC and AEPC should come-up with a scheme or project, and we will support it to make our employees productive.” 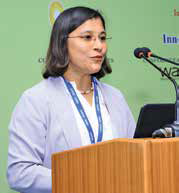 “Are we even expecting our HR team to be having a deep understanding of our products, our profit model, and our business happenings? Do we even feel that they are required? Specifically, are we even ready when global investors who are looking at us, or are we (HR) proving as a bottleneck to it?”